Although some children might be reluctant to believe it, math can be fun! There are many number tricks that seem unusual, but are actually fun and surprising! For example, you can figure out someone’s exact age by asking them to choose a number between 2 and 9. Here are the steps!

There are many other fun tricks like this. Next time you want to trick you child, try this fun math trick! This guy teaches how to do this trick with playing cards: http://www.youtube.com/watch?v=WhH8WMbxPEU.

You can also do more fun tricks with your child through this website http://www.cybraryman.com/numbertricks.html.

These fun number games are not only fun and engaging, but also a  good way for your child to practice his or her math skills

This continuation of our previous article “Numbers in Nature! – The Fibonacci Sequence” will cover another miraculous and seemingly arbitrary pattern that appears everywhere, even in ourselves. We are going to cover the Golden Ratio.

Looks complicated, doesn’t it? In fact, the idea is quite simple.

The Golden Ratio was discovered millenia ago in Ancient Greece, and has been found in nature and used in art for centuries since.

The ancient Greeks noticed when they measured a specific length (say, the distance from your shoulder to your elbow) and you multiplied it by approximately 1.618, you got remarkably accurate figure for a related length (say, the length of the entire arm). This may seem like a coincidence, but it kept coming up again and again.

The distance from your foot to your knee multiplied by 1.618? The length of your leg.

Looking at the length of our fingers, each section — from the tip of the base to the wrist — is larger than the preceding one by roughly the Golden Ratio. 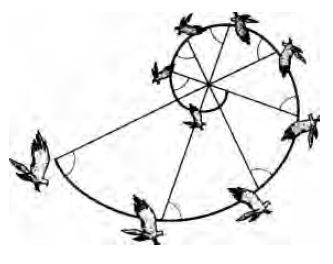 Whether you live in Palo Alto or Redwood City, Menlo Park or Atherton, you can make these observations by yourself! Start with your body and go into your back yard. You’ll be amazed at the patterns you find!

To learn more about math and how it can be used every day, visit us at