Math Appeal by Greg Tang, the same author as the New York Times bestseller, is a book of rhyming poems that pose math questions and provide tips and tricks for finding the answer. Math Appeal is bound to be a child’s favorite book to read and reread. It is very beneficial for your Menlo Park child to read since all of the problems are part of Menlo Park’s curriculum. It is a fun read with catchy phrases that will help your child solve math problems, particularly addition, subtraction and multiplication, faster and with higher accuracy. If your child enjoyed Math Potatoes (a review of Math Potatoes is up on the blog) they will definitely love Math Appeal as these two books are incredibly similar in the sense that they are books of math rhymes and tricks. At the back of Math Appeal, there is a section containing the answers to each question with an explanation to help your child understand the problem-solving process. I recommend Math Appeal to the children I tutor at the Mathnasium center. This book is a must read for all young children in the Palo Alto and Menlo Park school districts. 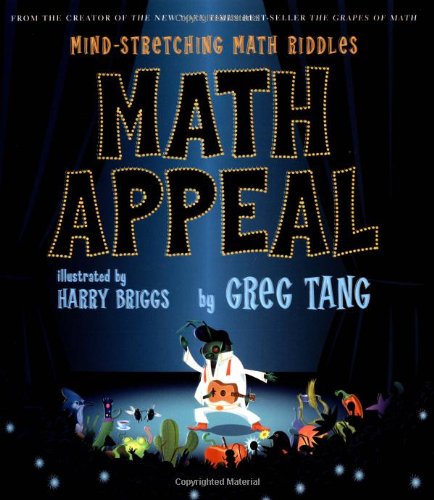 Everyone has heard of skydiving, probably because it’s such a risky and exciting sport! There are people skydiving all over the Bay Area, so let’s learn more.  Have you ever wondered, how does skydiving in the Bay Area work? How do humans survive jumping out of an airplane, anyway?

Well, the jumping out part is pretty self-explanatory. However, the parachuting part requires a bit of math to understand. Basically, the greater surface area ( another math concept!) of the parachute increases the air resistance on the person falling to the ground, allowing them to softly and slowly land. Air resistance is caused by an object pushing through the air molecules in the atmosphere, much like how you have to push through water when swimming.

The reason we can’t just jump out of planes and survive without a parachute is our velocity. The gravity of the Earth makes us accelerate as we head towards the ground, until our air resistance cancels the force of gravity out, and we read our terminal velocity. Though at a certain spot our velocity does not increase, this terminal velocity is still fast enough for us to crash against the ground! This is where, once again, a parachute comes in.

The air resistance is increased by the parachute, and therefore the terminal velocity is decreased ( by about 90%). This allows the skydiver to land safely.

Here is a video about this concept!

A great book to get at a library in the Silicon Valley is Safari Park by Stuart Murphy is a story almost any child can relate to. When Grandpa gets 100 tickets to an amusement park, he divides them evenly amongst his five grandchildren. The children can choose to spend the tickets as they please. With each ride costing a different number of tickets, the children have to decide which rides they want to go on and how to best spend their tickets. Your child can follow along with the children in the story and figure out if there are enough tickets to go on all of the rides they want. The author suggests giving your child twenty pieces of paper to act as tickets so they are able to follow along with the story. By actively reading Safari Park to your child, you will help them learn how to find an unknown in an equation and manage tickets/money appropriately in order to purchase all of the items they desire. Safari Park will teach your child practical math skills and is a recommended for young children in the Silicon Valley before they head to Great America in San Jose. Less Than Zero by Stuart J. Murphy is a wonderful math story of Perry the penguin who wants to buy an ice scooter but does not have enough clams to do so. In this story, clams are used as a form of currency that is equivalent to our dollar bills. While saving up for his scooter, Perry keeps track of how many clams he has on a graph. The story Less Than Zero will teach your child how to graph and use money. When Perry first learns to use clams, he spends all of them and has to borrow clams from friends. He soon realizes that borrowing money from other people only increases his debt, hence the title less than zero clams, and he will need to earn more clams to get to his goal of buying an ice scooter. Eventually, Perry finds a job and saves up enough clams to get his ice scooter. Perry’s persistence will teach your child that they are able to save up money to purchase items that they really want. If they want something badly enough, they will find ways to control their impulse to spend money on items they want simply because they are available. As your child follows Perry’s graph, they might even be inspired to make their own.

A great way for you and your child to spend time together while doing math is by taking your child to Palo Alto’s ice skating rink! Use the same techniques Perry used with your child. Give your Palo Alto child a currency that he or she would need to convert to dollars. Your child will not only have fun reenacting Perry’s dilemma, but he or she will also get to practice their math skills. Less Than Zero will teach your child valuable skills and I definitely recommend this book to all young children in the Palo Alto-Menlo Park area.

In Pigs go to Market, Amy Axelord incorporates math into a fun Halloween-themed story. When Grandma and Grandpa Pig eat all of the Halloween candy, Mr. and Mrs. Pig and their piglets are forced to take a trip to the supermarket to purchase more candy for their guests. Much to their surprise, Mrs. Pig wins a free five-minute shopping spree. On the car ride home, the pigs and their piglets decide to open up the boxes of candy to celebrate their good fortune. In a brief period of time, they manage to scarf down all of the Halloween candy they just got at the store. Given the price per pound, quantity, and weight of the candy, the child is directed to calculate how much candy the pigs ate and how much it would have costed them to buy those items had she not won the free shopping trip in Palo Alto. The Pigs make going to the market an adventure and this story will leave your child eager to go to the Palo Alto stores with you so they can weigh out items and calculate the cost! Pigs go to Market is a fantastic way for your child to practice these skills and build on their math knowledge. Head over to Books Inc in Palo Alto to pick up this wonderful story.

Now that school is in full swing, some of you may have realized you are missing some essential school supplies. However, lucky you, now that almost all San Carlos kids are in school (and not shopping for school supplies anymore), many of the items go on sale! Let’s do some exercises to figure out how much you will have to pay for school supplies with the available discounts.

If you head to an office supply store in San Carlos and buy 2 protractors, each cost $3.84, and the sale is a 50% discount on the second item, how much will you pay for both total?

Your entire school shopping list comes out to $52.75, after a 15% discount on all items. what was the cost of the items before the discount?

If one store in San Carlos offers pencils for a buy one get one 50% off, each pencil costing 75 cents, and another store offers each pencil for 55 cents, which store will be cheaper to purchase 10 pencils at?

Here are some possible stores in San Carlos to buy supplies:

Divide Your Way Through an Adventure!

Are you looking for a long journey filled with canyons, whirlwinds, and hot air balloons? The Great Divide by Dayle Ann Dodds is a “mathematical marathon” in which you can practice your division skills, while simultaneously enjoying an action-filled adventure! You get to go on an exquisite adventure without even leaving Palo Alto! In this unique story, eighty initial adventurers begin a great journey in a land dotted with lots of perilous hazards. Before long, you’ll find yourself immersed in the rich, delightful pictures, eager to find out how the race ends and who completes it! While reading this colorful picture book, be sure to predict how the eighty travelers are affected by each event, and try the math in your head beforehand. Along with the fast-paced plotline and the pleasant rhyme schemes throughout the story, you won’t feel bored at all! This light reading is quick and easy to understand, and is perfect mental math practice. Pick up this book at your local Menlo Park, Palo Alto, or Atherton library, and embark on this educational math trek today! For more fun ways to learn math, visit the Mathnasium of Palo Alto-Menlo Park.